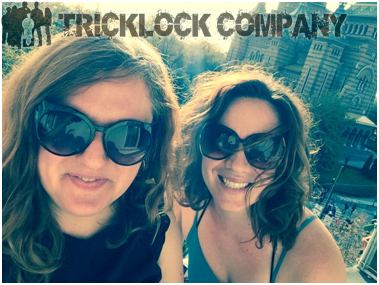 Hey There Beer Farmers, we hope you are well. We have quite the treat for you today! We reached out to Tricklock Company; they are currently in the throws of Revolutions 2016, an International Theatre Festival of incredibly impressive proportions. We wanted them to tell you anything they wanted to tell you, about it… They picked an incredibly interesting and fun way to talk about their experiences during Revolutions passed, that will make you want to attend Revolutions PRESENT! Enjoy a chat between Juli Hendren (Tricklock Company, Artistic Director) and Hannah Kauffmann (Associate Artistic Director). Enjoy.

Here we go again! The 16th annual Revolutions International Theatre Festival is upon us.  In case you aren’t familiar with Revolutions, Tricklock Company produces this three-week international theatre festival every January right here in Albuquerque. Through the cultivation of this city as a stop on the world-theatre touring map, we are creating a cultural fusion of performance ideas and processes here in our richly diverse community of New Mexico. Tricklock Company believes that exposure to the broad spectrum of world theatre can increase mutual understanding among people of all cultures, inspire individuals to create what they envision, and empower entire communities to improve the overall quality of life. Our dear friends at Tractor have been festival sponsors for many years and we love them and their delicious beer! The beer is necessary fuel in a stressful and crazy festival. The staff of Revolutions is immensely grateful for those moments when we can stop and have a drink.

Hannah:Let’s start with my favorite kind of totally broad and unanswerable question: what is your favorite thing about Revolutions?

Juli: Oh man. I love it all but I really like the galas. When everyone is together after the show, breaking bread, having a beer, talking about the show they just saw. The artists are there mingling with the patrons, the staff, the volunteers. It really becomes a different thing for me when we are hanging out together. The connection is so cool.

Hannah:Yeah, it becomes an opportunity to actually ENGAGE with the artists as opposed to “watch this show and go away.” I love the galas too.

Juli: What is your favorite Revolutions memory?

Hannah:HA – My favorite Revolutions memory is SO CHEESY and I am going to sound like a big huge cheeseball and OH WELL. It’s the memory of my very first Festival, in 2004 and I was eighteen and working as a volunteer. I went to see the Tricklock offering in that festival, which was an original, devised piece called ‘The Glorious and Bloodthirsty Billy the Kid: The Greatest Serial Killer of Our Time’ a wild west show and cabaret.  And I went to that because I had a huge crush on one of the cast members, and I got dressed up all cute, and I thought I was going to see this show so I could make out with this guy after and instead, after the show I went home and WROTE IN MY JOURNAL AT GREAT LENGTH about how I had never thought theatre could look like that. And it kept happening over the course of the festival, over and over as I saw companies from all over the world presenting their work, this surprise and joy and honestly – this HOPE that it ignited – I had never known theatre could tell the stories that I wanted to tell – that I could be responsible for creating them and that I wasn’t going to be subjected to the roles Neil Labute creates for women for the rest of my creative life. It absolutely changed my life. So there. Cheeseball.

Juli: No way! That is awesome. I have had so many amazing moments in this festival. Seeing people’s work from around the world. It is life changing for me sometimes.

Hannah: What is the most bizarre thing that has happened during Revolutions?

Juli: One year the airport was shut down because a group from Russia was traveling home and the pyrotechnics they used in their show had left a residue in their suitcase. The sensors picked it up and thought it was a bomb. The Mayor had to come out. The whole airport SHUT DOWN! Our poor Russian friends! They were detained and questioned. They were so stressed out. We were like, “It’s cool! They’re just theatre artists!” They were delayed here for a night so we made sure to give them loads of beer. It definitely helped.

Hannah: I TOTALLY remember that! The Reptilian Lounge was going on? Is that right? I think they walked in the door at the theatre in the middle of the show and we just held out glasses of beer for them.

Juli: Haha! Yes, we totally did. So here is a silly and superficial question but that’s how I roll sometimes, what is your best and worst fashion choice for the festival?

Hannah: I have worn so much stupid shit I don’t even really know where to start. I’m a 30-year-old woman who regularly wears a cow suit. I have things that are called “sexy Hawaiian dress” and “carpet outfit.” As a host of the Reptilian Lounge, I have a lot of freedom to don pretty much whatever the hell I want and people generally go along with me.

Outside of my Lounge life, I try to look presentable in the most “this might have been an accident” way possible. My wardrobe is pretty simple and I tend to wear the same things over and over. It really depends on what I have in store for the day—if we’re at UNM, I try to avoid heels because the floor is super slippery, things like that, but it’s pretty basic. Last year (two years ago?) I was wearing a super tight pair of jeans and there was an outdoor show at the National Hispanic Cultural Center. I decided to climb a tree to see better and split my pants open from the crotch up beside the back pocket all the way to the waistband. My jacket did not cover this. I was wearing underwear that could not be defined as “full coverage.”

Hannah: Also,I was that blonde once and I don’t regret it.

Juli:Haha! You were blonde! That was a good look for you. Speaking of blondes…what about a favorite Tractor moment?

Juli: I know right? I think maybe one of mine might be more on tour, which is where we find a lot of companies for the festival. We were on tour in Poland and one of the Polish artists who had just been at Revolutions said something along the lines of, “I miss Tractor beer.” Yep.

Hannah: Yeah, we do a lot of sharing the love around Tractor beer. We’re grateful.

And hope to see you at some shows!