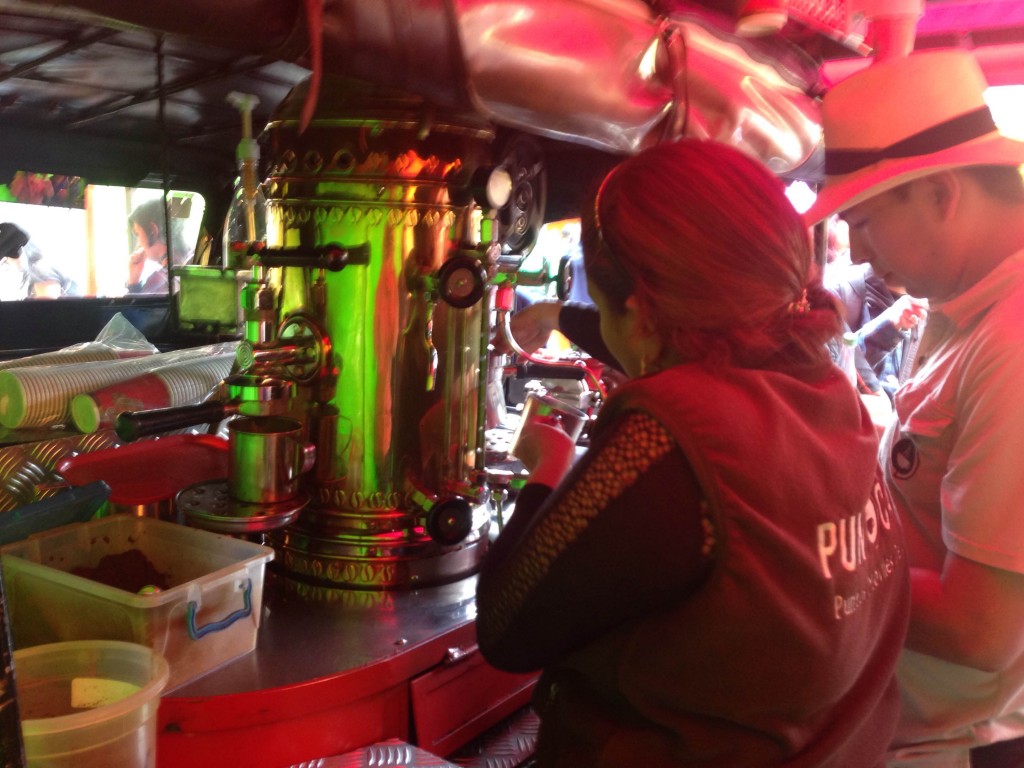 I was recently fortunate to travel there and let me tell you: I still can’t tell you much. And that’s because it’s FILLED with incredible sights, sounds, and sabores. It’s nigh impossible to take it all in, especially in the mere 10 days I was there.

I was invited to visit by my Bogotán boyfriend, and feeling adventurous I took him up on it. We started in his home city, where we spent my first night doing something unmentionable I’m sure. The next day, however, was very mentionable! We woke up and hopped DIRECTLY onto a couple of bicycles and headed downtown on the ciclovía, which Colombia is famous for having originated. This was amazing as it afforded me some killer at-a-pace views of the city including some amazing street art, and a sombre yet beautiful memorial to a mid-20th century, civilian street war called El Bogotazo. It is constructed simply, of several very large, empty mausoleums which read “LA VIDA ES SAGRADA”. They should have been filled with bodies of unidentifiable victims, but no one knows where they… um… ended up. Archaeologists expect to one day find mass burial sites of nearly 4,000 people.

Upon arrival downtown, we hopped off our bikes to a glass of oh-so-sweet fresh squeezed, pulpy OJ. I don’t think orange juice has ever tasted so incredible. We then visited a flea market where we procured one of the best coffees of my life (and I’ve had some wicked good coffee), brewed in an old-timey copper espresso machine. Then an agua fresca made of Guanabana (you need to google image search that alien fruit IMMEDIATELY, and say it out loud for some muppet-y good times for your mouth), then shopping for everything from cute hand stitched leather coin-purses in the shapes and colors of fruit to antique wares that looked like the antique wares of our neck of the woods but not.

Oh, you know, I could go on and on and on about the wonders of Colombia but why don’t you just go and see it for yourself. Heck, I’m going back there in March with my theatre company Tricklock for a massive international theatre festival called Iberoamericano Festival de Teatro de Bogotá (look it up on facebook – it’s AMAZING). You could come with us for just $100! How could that be possible, you ask? Why, buy yourself a raffle ticket here:

And Oh! Actually we’ve got our own international theatre festival here in Albuquerque called Revolutions, did you know that? It’s on for another week so please come see a show!

Perhaps you could see my Bogotán boyfriend’s show, Ceniza, about a soldier who takes refuge from war in a blown-out circus. Umm… cool, right? Yeah. Buy a ticket. And Pop Fizz and TRACTOR BREWING are catering his opening night so, you know, go eat a paleta and have a #milkstoutmonth before it’s too late!

So, see you there? And then see you in Colombia in March? Sounds good.

P.S. If cocaine is all you think of, it’s time to do some travelling. Colombia is so so so so so much more than this one piece of its (albeit riveting) tragic history.