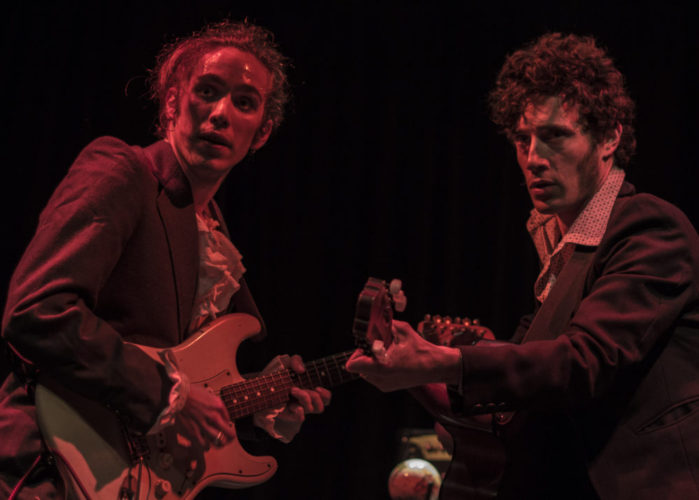 Written by Katy Houska, she has been a Tricklock Member since 2004.

“All politics is local” is something someone told me that someone said in some speech during some march that happened on some recent Saturday that saw a remarkable sum of some women. I was so intrigued by the notion that I looked it up on Wikipedia. It’s a phrase used often in U.S. politics and originally coined in the 1930’s by Tip O’Neill, prior to his service as former Speaker of the House. I was hoping, so this blog could manifestly support non-partisanship, to learn that he was a Republican. Alas, he was a Democrat, which will make me have to work harder to flesh out my soft-thesis today. Which is that: We are not our political parties. I’ll also be plugging Tricklock Company’s 17th Annual Revolutions International Theatre Festival here, so buckle up for a journey through my weirdo mind as I try to connect it all! Fast-forward to the “P.S.” if you just want the magazine-caption version.

Because I work for both Tractor Brewing and Tricklock Company, I am kind of like a human link between the two. In their Venn diagram I am the happy & lucky human standing at the center, in a sense linking two of Albuquerque’s awesome-est businesses (yes, of course I admit bias). And because I represent that link, I have been tasked with writing something for Tractor’s blog regarding Tricklock’s Revolutions, a true wonder among Albuquerque events. The inspiration of my life, the thing that has most defined who I am and how I behave and why I love and feel we need art and how I feel about politics and travel and theatre and stories and human connection. I can distill all of those superlatives easily too, into the most important lesson I’ve ever learned (and re-learned and re-learned for 16 years and counting): Revolutions International Theatre Festival has taught me that humans are humans. Governments are governments. The one should never ever be confused for the other.

The more than decade-long relationship between Tractor and Tricklock has always made sense because of our shared, and deeply rooted, value of the importance of community.  More specifically, that we both are organizations who specialize in hosting and gathering, fostering a strong & dynamic sense of our community here in Albuquerque. Revolutions is Tricklock’s main manifestation of that specialization. Tractor practices it not only with regular events like Art Fight or Drag Bingo, it could also be argued that they are in the practice of fostering community just by opening their doors on a daily basis. I’ll add from the peanut gallery (I just made up a peanut gallery to comment on my own self! Whee!): The mostly television-free environs definitely lend themselves to communing, encouraging dialogue and togetherness, too. Gathering. Breaking Bread. Taking Drink. Drinking in Art. Savoring. Sharing Opinion. Allowing for Respectful Disagreement. Sharing Excitement. Sharing Catharsis. Being Together. Practicing politics in these critical, radical, common ways. Non-partisan. Non-political, really.

We are not our political parties. We are not our fears. We are one another’s neighbors, co-workers, IT consultants, drive-thru attendants, town artists, beertenders, soul gardeners… sisters and brothers. We are a family of humans. We disagree because we are human-shaped snowflakes and no two of us are alike, and no two of us have precisely the same needs, precisely the same perception of pain, or precisely the same emotional infrastructure. And our fragile ability to coexist under such conditions of ever-so-slight yet ever-so-significant differences are being played. Undermined. Our disagreements are being co-opted and malformed and used to take power over us in the form of fear. Our fears have become so powerful that we are having a hard time seeing the seemingly unsolvable problems for the humans that they represent. Let us try with all our might to regain our focus on humanity, rather than the fear mongering that politics and attention-hungry media purvey. Let us gather around a sacred expression of art, the reflection of humanity that is live theatre and meet human artists from around the globe and talk with them, and meet human spectators from around our city and talk with them also. Talk about what show we all just witnessed and what it meant to us. Let’s argue about it, because that is healthy and we need the practice. Let’s use the opportunities produced for us by Tricklock Company, with the critical support of local businesses like Tractor Brewing, to practice local politics; that is to say: Gather with our community, talk about ideas, argue a little, and come to a common ground, if it ends up being that the only common ground we can find is that we are standing in the same space, having had the same theatrical experience, at least that’s a start.

If “All politics is local” then lets get local. See you at the festival!

With Gleeful Irreverence to Systematic Imposition of Fear-driven Society,

Revolutionary since Now, Any Movement that Manifests Love

P.S. Did I mention Pussy Riot is kicking off Revolutions with their show “How to Start a Revolution” on March 14th? Followed by a kick ass theatrical lineup featuring companies from Argentina, France, Zimbabwe, Uganda, a highly topical collaborative performance by Tricklock & friend-artists from Poland & Colombia regarding displacement, and on and on and on! Visit www.tricklock.com to read all about it! Now there’s some news to “Extree, Extree”!