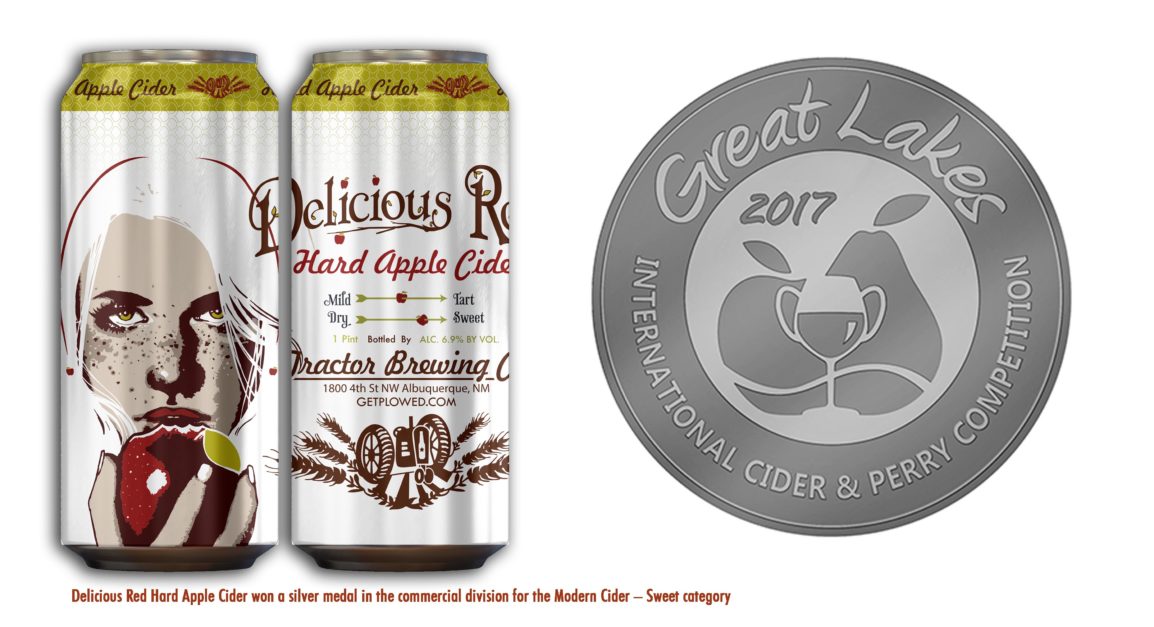 HARD CIDER IS A HIT!

Once again Tractor Brewing Company is calling attention to New Mexico on the national stage, but this time it is for their popular hard cider. At The Great Lakes International Cider and Perry Competition (GLINTCAP) in Grand Rapids, MI, the local craft beer and cider producer won a silver medal for its staple Delicious Red Hard Apple Cider and a bronze for its seasonal Tractor Cranberry Ginger Cider. This is the first time that Tractor has entered the competition and was the only New Mexico cidery to enter the 2017 contest, which is the second largest in the world.

“Last year cider was our fastest growing product category,” said Skye Devore, co-owner and president of Tractor Brewing Company. “We learned about GLINTCAP when we attended the annual United States Association of Cider Makers convention in February and figured it wouldn’t hurt to get some professional feedback on what we are making. We hoped we would win something and are ecstatic to have brought home two medals to our state.”

Delicious Red Hard Apple Cider (6.9 ABV) won a silver medal in the commercial division for the Modern Cider – Sweet category. Made with apples from the Pacific Northwest and carbonated to perfection, it is available year-round in draft and 16oz cans. Delicious Red Hard Apple Cider was also named by Alibi readers as the Best of Burque 2017 Best Cider. No second or third place cider was named.

Tractor Cranberry Ginger Cider (6.2 ABV) won a bronze medal in the commercial division for the Specialty Cider and Perry category. Made with a base of apples from the Pacific Northwest, cranberry juice and fresh ginger are added creating a zesty and daring end result. Tractor Cranberry Ginger Cider is available seasonally in the winter on draft only.

Growth and interest in the craft cider market has also lead Tractor to expand on its annual event Cider Day Night Fever that occurs during Albuquerque Beer Week. This year’s event on June 3rd will feature ciders from Red Door Brewing Company, Skarsgard Farms, Santa Fe Cider Works, Palmer Brewery and Cider House and The Craftroom. Both Delicious Red Hard Apple Cider and the last known keg of Cranberry Ginger Cider will be on tap for the event as well. The event will take place at the Tractor Brewing Company Nob Hill Tap Room located at 118 Tulane SE.

Tractor Brewing Company also plans to expand its seasonal hard cider offerings throughout 2017. Upcoming selections include Thai Basil Mint, Berry, Dry Cider and Ginger. Those that are well received will be considered for limited runs in 16oz cans.

Tractor Brewing Company craft beers and ciders are available in throughout New Mexico and west Texas through Premier Distributing Company or L&F Distributors.

The 2017 Great Lakes International Cider and Perry Competition boasted entries from nine countries and 1206 total entries. The current competition evolved from the Great Lakes Olde World Syder competition (GLOWS) which first launched in 2005 and included only ciders from six US states and Canada.