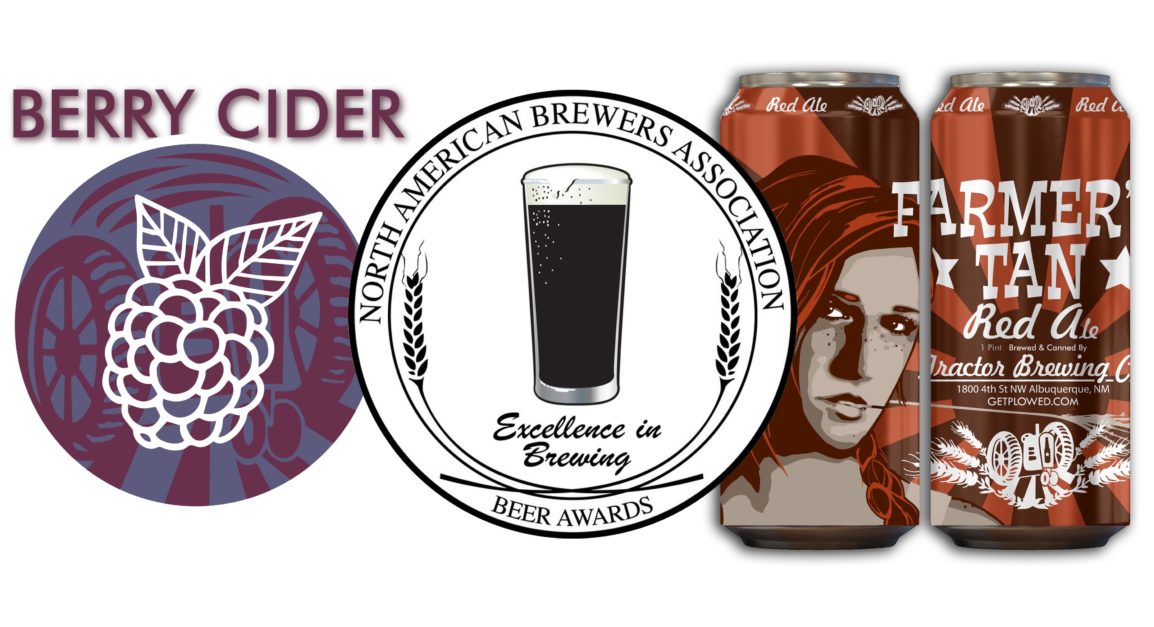 For the third time in two months Tractor Brewing Company has been awarded top honors for its beers and ciders, this time from the North American Beer Awards! The iconic flagship Farmer’s Tan Red Ale took the gold medal in the Scottish-Style Light, Heavy and Export category. The gold medal in the Fruit Flavored Cider and Perry category went to the Tractor seasonal Berry Cider.

The awards come on the heels of news in May that Double Plow Oatmeal Stout had earned gold at the Los Angeles International Beer Competition and that two of the company’s ciders had won medals at The Great Lakes International Cider and Perry Competition (silver for Delicious Red Hard Apple Cider and bronze for Cranberry Ginger Cider).

“Our guys in the brewery work so hard,” said Skye Devore, co-owner and president of Tractor Brewing Company. “It is so fabulous to see all of that work pay off on the national stage. It really reinforces the work we are doing and continues to put Albuquerque on the map as a premier brewing city.”

Big, rich and malty, Farmer’s Tan Red Ale was designed to bring forward bold candy flavors that mingle with slight notes of earthy hops. Pour yourself one of these deep amber ales and let your senses enjoy the aroma of toasted caramel malt that finishes slightly sweet and unbelievably delicious (5.84 ABV, 25.5 IBU). Farmer’s Tan was the first beer ever brewed by Tractor. It is a year-round staple for Tractor Brewing Company in both draft and kegs and is always available at both their Nob Hill Tap Room and Wells Park Brewery locations.

Berry Cider starts with the same Pacific Northwest Apples used to make all of our ciders and then we turned it up a notch by adding one hundred pounds of fresh berries. What kind of berries? Blueberries, blackberries and raspberries come together to create a tart flavor that is refreshing and crisp. Deceivingly light in body and taste, this 6.0% ABV cider is pink with a slight haze and impactful aroma of apples and berries. Our semi-sweet Berry Cider pairs perfectly with a summer day, or even just a sunny disposition. Available late April through early September at our tap room locations and limited distribution.

Both Farmer’s Tan Red Ale and Berry Cider are available through Premier Distributing Company and L&F Distributors in both New Mexico and west Texas.