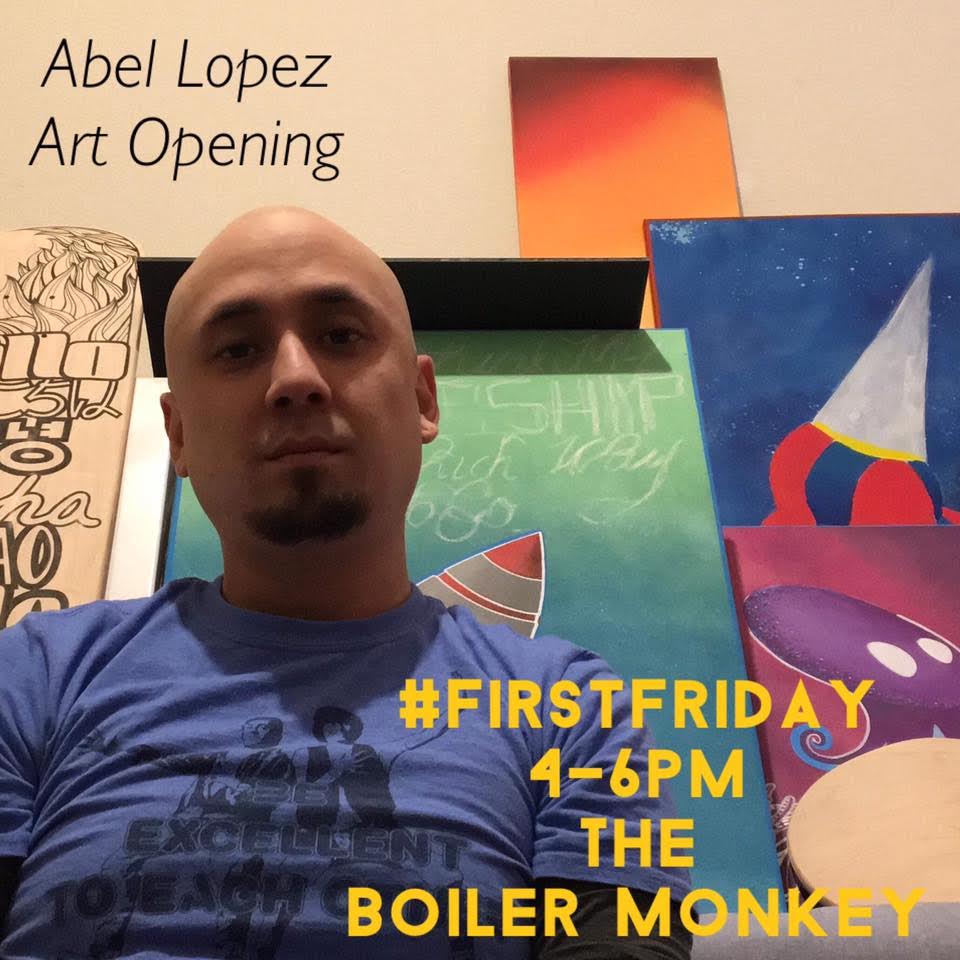 “I overthink so many things. I think my style is influenced by this because it is one of the few aspects of my life that I have the most control of and because of the constant tedious line work I like to do I have gained a little more patience in my life,” he says.

Who’s he? Abel Lopez local artist and art supporter – that’s who. Immastar Productions had the pleasure of sitting down with Abel recently, to talk about his entry into the ABQ art scene, among other things. This self proclaimed lover of beer, is headed toward his first solo art opening – and enjoying the journey there. We were lucky enough to catch him between pieces as he approaches #FirstFriday.

“I’ve been involved with art events here in Albuquerque for about 2 ½ years and it’s been one of the most accepting groups I have been part of,” said Lopez. You can often catch Lopez slinging paint at I’LL Drink To That or Art Fight events, and when he isn’t painting live, he is often with a beer in hand and sketch book at his side, signature red pencil not far away.

What is far away, is the land that Abel hails from.

“I’m actually from quite a few places and this was due to my father being an officer in the Air Force,” said Abel.

He then added: “ I was born in Washington, D.C., we moved shortly after I was born and lived for a few years in Tokyo, Japan. We spent a brief time in Gwangju, South Korea where my mom was born and raised before moving to Honolulu, Hawaii followed by a brief stint in Brindisi, Italy. In 1994 my dad retired from the Air Force and we decided to move to Santa Fe, NM where my father was born and raised. I lived there until 2003 when I moved to Albuquerque, NM for college and have been here ever since,” wow, quite the trek, right?

We are glad he landed in Albuquerque, and didn’t take a page from Bugs’ by deciding to go left at Santa Fe. The journey and travel have been riddled with experience and impact, on the detail oriented fine lining Lopez. His craft and work are clean and show signs of attention to detail and the ability to take pride in one’s work. The effort to present, balance, and perfection by way of visual art is not something Lopez takes lightly. He had some inspiring words about his upcoming show at The Boiler Monkey.

“I’ve approached this as one of the biggest moments in my life because it really is.  This has been a goal of mine for so long and for it to be coming to fruition has brought on a whirlwind of emotions.  I’m definitely trying to do the best work I have ever done and show the progress I’ve made over the years,” he said.

Although connected to a scene that he views as supremely supportive and life-changing, Abel doesn’t view Burque through rose colored glasses. He realizes the challenges of “making it as an artist,” the obstacles created by the market and the makers of it. “I still encounter the occasional person who scoffs at the idea that someone cannot have a career as an artist and I personally feel that this type of narrow mindedness is one of the biggest hindrances to the progression of art in this city,” he said. Speaking of “art,” what about A.R.T? We asked, just for kicks… you know, since we were talking about art and all…

And, well, because we were drinking beers…

The question was really about the good and bad of our city as of late. Abel ate that question up, and spit it back out, with an answer, that many of us will likely agree with – even cheers to… We asked him what he loved and hated about ABQ.

“The beer. I love how many breweries we have in this city alone and how many great beers have been produced by them.  And what I hate is the A.R.T. Project, it has been a logistical disaster for this city without providing any true benefit. It hurt local business, it made Central Ave. even more of a traffic nightmare, and it’s wasted so much taxpayer money.” Cheers, right? Money wasted, beer drank – seems pretty much like a toast worthy note to make when asked what grinds your gears and what best greases em’ too.

A beer or two in – we got all sentimental and asked Abel about friends – who they are, what they mean to him, and why. We asked, because, those of you who know him, know that when Abel has that sketchbook and beer it’s often in tow at something “local” – a show, a benefit, an art opening not his own. His network has grown – is growing – it’s noticeable, we noticed, so we asked him, who some of his favorites were/are.

You’ll be wanting to pay them for their work later – or so we hope. About that… We asked Abel about the art world and the local money being made in it. In that vein, we wanted to know what people should know, as they go out and intend to “collect.” Of art and its value, Abel put these poignant and thoughtful words together.

“Most artists I know will work with people on pricing but at the same time I’ve seen people approach artists with a potential commission that can done for ‘cheap’. Please value that an artist puts in so much time into their work and that they spend quite a bit of money on supplies to create these amazing pieces of work,” he said. To that, we couldn’t agree more. In fact, we agree to it, to the tune of inviting you out to see what Abel has to sell you come #FirstFriday. Want a bit of a run down of what you might be able to expect – fine, but you still gotta go.

We asked about Abel content and themes in regards to the show. He had this to say.

“As far as themes go I’m trying to focus on doing as much lettering work as possible, over the past couple years it’s the number one thing that I get the most compliments on so I wanted most of my pieces to feature lettering.  Music is also one of the biggest influences on many of the pieces but I will also have a few pieces focusing on some of the cultures I have experienced and a few pieces featuring some cartoonish related material. And of course there will be a couple ice cream cones.”

Right on – maybe we will order a double scoop! See you there.