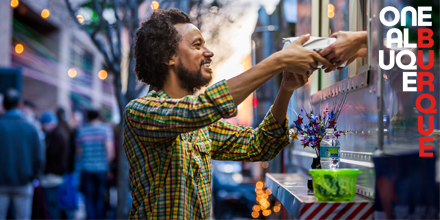 “Tabling” is a common activity among small businesses, organizations, and agencies working in the for-profit, non-profit, and public sectors.  Whether simply handing out printed informational materials, advocating for a particular cause, or selling a product, tabling is one of the most cost-effective ways to bring products and services to the market and also one of the most accessible to the community-at-large.

When the Mayor’s Office started tabling at local events and using it as an opportunity to help drive the City of Albuquerque’s new promotional effort, “One Albuquerque,” Two Way Street thought it would be important to conduct an interview with the managing body/CABQ employee of this new “thing,” Carlos Contreras – AKA – me!

So I answered their questions, with some input from those around and above me – and that interview will come out in the weeks to come in a Two Way Street publication you can receive from a local street vendor, after you donate some pocket change or a few bucks.

And this is what is beautiful about it – information is being disseminated in a more equitable fashion in Burque these days, thanks to outfits like Two Way Street. Not everybody has a smartphone or computer like the one you are reading this on. Two Way Street hands you a newspaper. Not all newspapers gear themselves toward informing the community about important issues, resources, and opportunities at their fingertips; but now, we have Two Way Street to fill part of that void. Not all small businesses lend their web presence to the idea of spreading information and ideas that have nothing to do with their particular revenue stream or model, but Tractor Brewing does – and so we have #CommunityDialogue.

So here’s to all of that. Check out Two Way Street’s questions and the City of Albuquerque’s answers. Then, join us on September 7th for FirstFriday, ArtWalk. The City of Albuquerque is supporting local organizers and organizations: Enchanted Pop-Ups, Mariposa Music, Two Way Street, Mothership Alumni, ArtsCrawl, and Downtown Mainstreet, as part of our One Albuquerque: Engage project. Catch us for FirstFriday from September through December – and stay tuned as partners are added and the project continues to grow/move.

By coordinating contracts with local design firm RK Venture and local screen printer Screen Images, Contreras has helped create a new product line of t-shirts to sell to local citizens at special events, cultural facilities, and public spaces.  These sales have not only established a supplemental revenue stream for local government, but it has also demonstrated ways in which local government can help diversify Albuquerque’s economy. This aligns with the City’s new Economic Development Plan in the way it supports small local vendors over those coming from out-of-state.

Questions for One Albuquerque

●     What is the value of diversifying our local economy? (Diversified Economy Definition: A diversified economy is an economy that has a number of different revenue streams and provides nations with the ability for sustainable growth because there is not a reliance on one particular type of revenue)

In “diversifying” an economy, the goal is to maximize the use of existing resources and opportunities in a way that works for everyone.  This involves the City doing whatever we can to support small local businesses, women owned business, and minority owned businesses. Before colonization, New Mexico had a diverse economy. People bought, sold, and exchanged the goods that were abundant in their area, like food farmed in the Rio Grande valley and handcrafted goods like pottery in Acoma. Over hundreds of years of colonization, the economy narrowed – whether the focus was the railroad, the Mother Road, the Labs, or the federal government, in general. When we talk about diversifying the economy we are really talking about returning to an approach that supports and enables our community members to capitalize on their strengths. That means we need to continue to support large employers, but we also need to support the small or solo business owner, the food economy, the creative economy, and the tech sector. The wide range of skills and ethnic backgrounds that make up our vibrant, diverse community should be our competitive economic advantage as a city.

●     What is the value of being able to diversify the product line to accommodate different departments?

When it comes to local procurement, the focus of the Keller Administration and many other City departments is tasking themselves with finding more opportunities for local vendors to get involved in the bidding process and doing business with the City of Albuquerque. It gives us here at the City the chance to lead the charge and walk the walk.  We can diversify our economy by breaking up large orders into smaller pieces so more local businesses can compete. We can also work proactively with the community to say, here’s what the City buys, so if you get into this line of work, there will be regular opportunities to compete for these contracts in the future.

●     What is the value of being able to identify city employees with One Albuquerque branding beyond their traditional uniforms (etc. Code enforcement officer)

The Keller administration sees the “One Albuquerque” brand and its recent increase in visibility by way of City employees wearing t-shirts as a chance to build bridges between the City and its citizens.  We want our City employees to be proud of their city and the fact that they work here for themselves and on behalf of their fellow residents. One Albuquerque as a movement, campaign, branding and messaging effort is utilizing the merchandising aspect of the brand to create brand ambassadors: we have 6,000+ city employees that can help us relay a more positive message about the City and its workplace.

●     What is the value of selling products out of a City-owned cultural center like the KiMo?

We have developed a product that with some strategic placement brings traffic through our city venues that we are most proud of. The Kimo, South Broadway Cultural Center, and ABQ Museum are all incredible venues and centers of activity for our city.  With this new effort, we are able to invite people through the doors to buy a shirt – and while they’re there, hopefully they will also buy tickets to a show or check out the art on exhibit. Traffic of any kind through our city’s assets and gems is something we are continually aiming to increase and capitalize on in any way possible.

●     How many shirts have One Albuquerque printed and is there a goal for how many to sell over a certain period of time?

There are over 1,000 out there either for sale or already on the backs of proud Burque residents. From people who have been given Mayor’s Hero Awards, to City employees who are pledging to abide by and challenge themselves to live up to City’s health initiatives to groups of volunteers living within and beyond City limits, there are lots of brand ambassadors already out there. We don’t have just a number in mind – we have a goal of spreading the story about the work that is at the heart of One Albuquerque. T-shirts are a tool for prompting that dialogue.

●     How does ABQ Art Walk align with the Mayor’s new Economic Development Plan (the 6 different focuses)?

ABQ Art Walk showcases many local food and beverage businesses and attractions on Central for locals and tourists alike. ABQ Art Walk allows our administration to highlight the work of our community artists and activists as they engage in efforts to lend to the vibrancy of an area that needs a little love. With support from Mayor Keller and numerous departments at the City, ArtWalk and events like it will aid in City efforts aimed at creating a safer, more inclusive, and innovative Albuquerque. We can all support local, aim to build the sustainability of local businesses by way of patronage, and increase awareness around public safety issues that our community is facing right now. Every great city has a vibrant downtown. To create a vibrant downtown, people from all over the City need to feel safe. Programs like ArtWalk put eyes on the street and create an inviting atmosphere that draws folks who ordinarily might avoid the area.

●     What is the value of selling papers while tabling?

Not all of our city’s residents get their information in the same way or place. Not everyone has computer access or a smart phone in their pocket. We feel like messaging from our city’s leadership should be made available and be wide spread, in a number of fashions, and for all residents attempting to gain access to information and resources. Public private partnerships like that of Two Way Street and the City of Albuquerque allow us to walk the walk of equity and inclusion by giving those without access to information and other resources an opportunity to be a local subject matter expert and become a source of information.

●     What would be the feasibility of being able to sell/distribute Two Way Street’s publication in (collaboration with One Albuquerque) at other city facilities like public libraries?  How many copies would we need?

The process by way of getting something like this established could be one that may take a while as some of our libraries are part of County agreements and partnerships as well – but where there is a will there’s a way and we are committed to considering any and all opportunities for using this as a tool to increase awareness’s among our city’s residents. Let’s continue that conversation.

●     Are there any other products/merchandise that One Albuquerque plans to develop over the next few months?