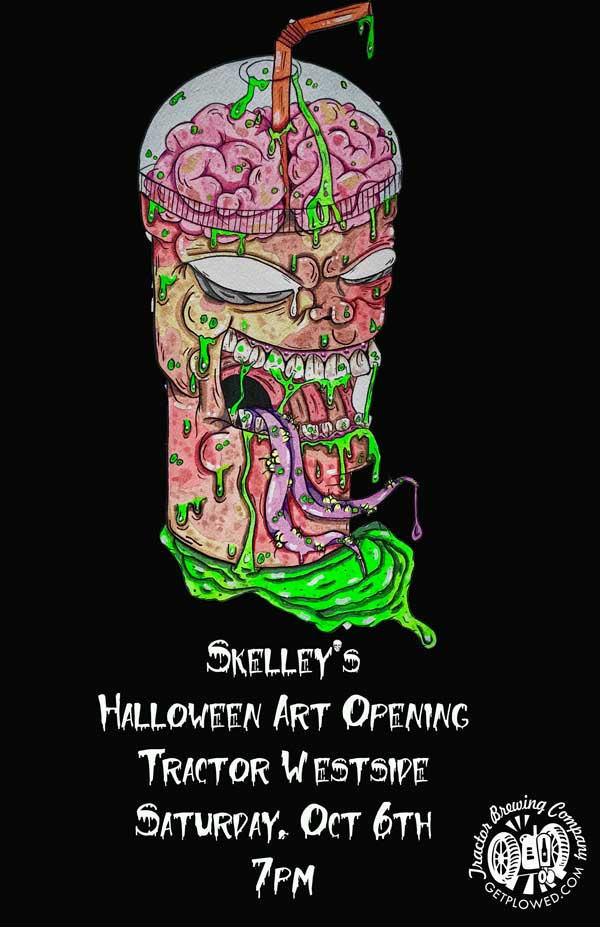 “Over the last few years my inspiration changes sometimes even daily but as of the moment what really inspires me are those people that I follow were always on the hustle who are always trying to better themselves for them self and those people who are out here doing stuff for community,” said Skelley, when we asked him about what inspires him. Skelley is set to show his art at Tractor Westside in October.

You might have seen some of his zombies and monsters on the walls of local coffee shops, and taprooms in the last year or so. Skelley could often be found painting live – dead things as it were, live – and although that has passed a bit in its frequency, he wants everyone to know he is still here and continually growing and evolving as an artist.

He has gone through a lot of change and growth. Skelley is someone who is an inspiration to many, as he has entered in an artistic life that is often in the middle and mix of things/places that are filled with folks consuming alcohol. For someone who’s accomplished over 5 years worth of sobriety, we have to imagine that is tough. He talked about it a bit, when we asked about successes and challenges along the way to them.

“Art to me is my escape and whenever I have challenges I face in my life I turn it back towards artwork,” he said.

“For example, I just recently switched jobs and my old job was so stressful that I turned the artwork at work and at home just to take my mind off of it but since I switched jobs I’ve been at peace.
I could sit here and tell you that sobriety and maintaining my sobriety is one of my biggest challenges but being that I am almost 7 years sober from alcohol, and over five years sober from drugs, I can’t use that, as I have definitely created an environment routine and mindset That have helped me to continue the path I am on,” he added. We like that – escape with art – and never look back, Skelz! We will follow along!

Followers came up in our conversation as well. When talking about what Skelley hopes to get out of this show opportunity and those beyond it he had this to say, “Out of this opportunity I really hope to gain new fans and be able to sell artwork on a more consistent basis than I already do. But more so than that I really hope to break out of the box of zombies and weird creatures which is kind of ironic considering the show I am about to do is during the month of October which is known for weird creatures and so on; I’m also hoping to in a sense let people know that I haven’t disappeared just because I don’t do as many live events [anymore].”

Even though he isn’t out and about as much anymore, we just think that means you have to take the opportunity to see his work when it opens, and shake his hand and buy him a Rootbeer on October 6th. When we asked what this all means to him, he humbly thanked this community by saying, “All this amounts to being hella thankful for the community around me and those who see potential in individuals like me and others and want to watch us and the community itself grow and thrive. I will always be humbled [by those] who have taken those chances, not because they’re afraid of failure,but because they understand that chances are everything in a sink or swim world.” Amen to that, Skelz! Sink or swim – paint or die! Show up and be seen on the scene on October 6th. Shake this man’s hand as he continues to hustle in the name of community. Art, it’s what we do, well. Cheers, Tractor Brewing family. Thanks for another opportunity for some #CommunityDialogue.”