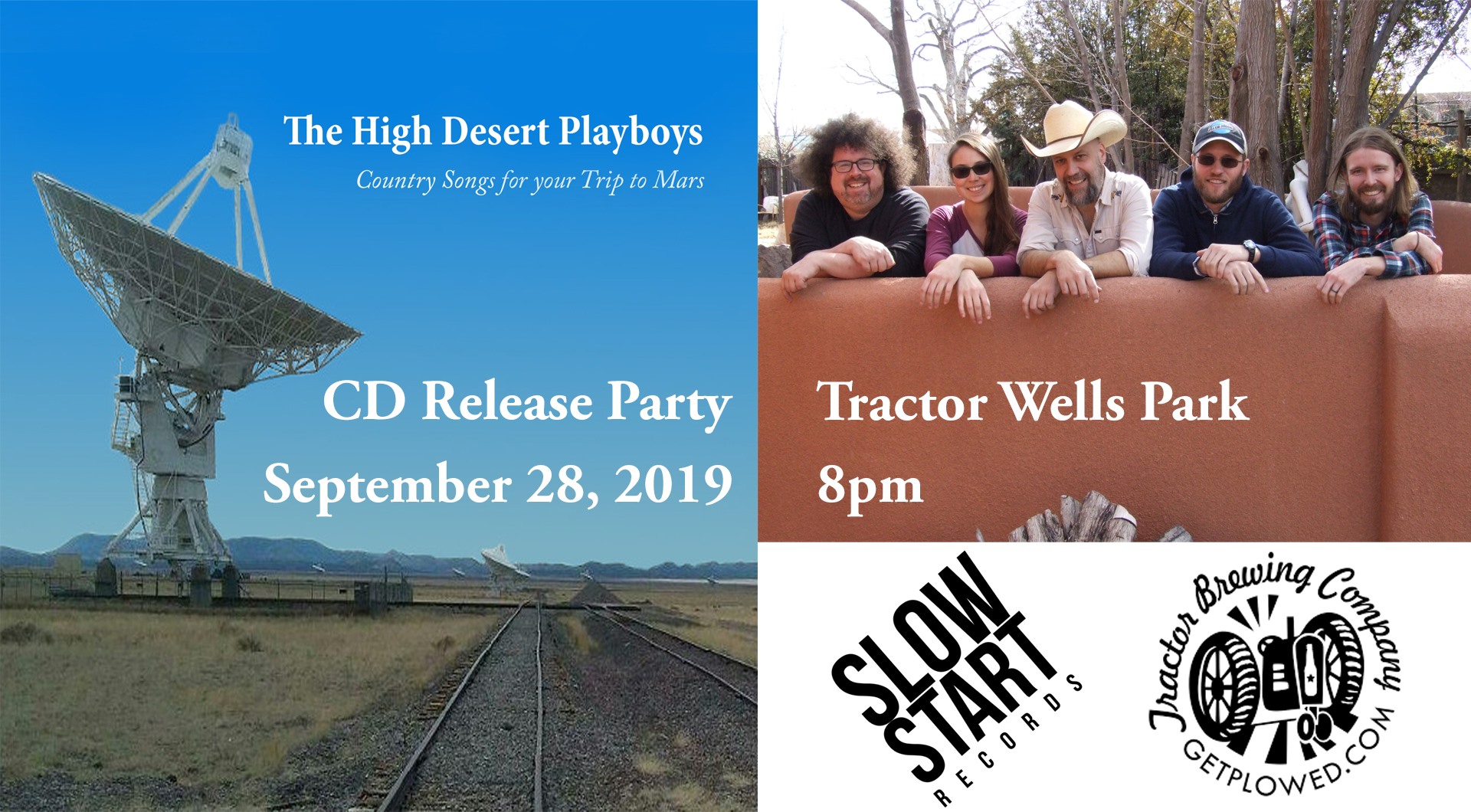 We have a new album! Join us for our first release on Slow Start Records (San Antonio, TX) at Tractor Brewing Wells Park!
“Country Songs for your Trip to Mars” is six months in the making, recorded entirely without edits or overdubs to four mics in the middle of the studio. Aside from the new album, we will have T-shirts and stickers, so come on out and grab the new stuff from your favorite original americana band…

BIO:
The High Desert Playboys, hailing from the high desert haunts of Albuquerque, feature some of the finest americana and country musicians in New Mexico. Playing songs of love and loss drenched in delicate harmonies, they combine old school americana instrumentation with modern themes and images of the desert southwest, seamlessly creating a diverse blend of sounds which will find its way into your heart and on to your favorite road trip playlist.

They are led by singer/songwriter Clark Andrew Libbey, a professional musician with over 27 years of experience. One of Albuquerque’s best-known songwriters, he has toured throughout the country promoting his last album “From the Deserts of Ohio”. He is joined by Ryan Goodhue, a jazz trained pianist from Boston whose honky tonk sensibilities hearken back to the haunting sounds of long-gone wild west. Mikey Hale, one of Albuquerque’s finest drummers, rounds out the foundation of the band. Accomplished pedal steel player Bud Melvin and violinist Kristen Rad, both exceptional soloists, give the band an old school country sound that works for crowds of any age.

Their debut album “Country Songs for Your Trip to Mars” was fired in the crucible of New Mexico mountain towns, forged from stories of unrequited love and dripping with the desperation of the examined life. Intended as an americana soundtrack for our future trips to the red planet, space themes dot the stories on the album, but still fit comfortably in to a traditional sound. The opening track “Like I’ve Never Seen the Sun”, finds our protagonist on the road and deeply in love, although sadly the feelings are one-sided. “I’m Broken Down” is the classic fun, upbeat bluegrass influenced song which hides a lyrical sadness with a delightful honky tonk piano. Other stories on the album include “Sir Lawrence of New Mexico”, a portrait of a life lived with imposter syndrome, “The Night that the City Hall Burned”, a fable based on the French revolution, and “Oh Miss Austin”, a story of the Island Queen, a ghost ship on the Ohio river, haunted by a man headed to New Orleans to marry his darling before his life is tragically taken. The final track “Golden Records” explores the day the aliens hear our signals sent from the VLA radio dishes in Southern New Mexico, and come to destroy us all….a natural theme for a country song to be sure.

“Country Songs for your Trip to Mars” has a sound unique in today’s recording world. Recorded live by a 5-piece country band, there are no overdubs or edits on the entire album. All of the harmonies, leads and instrumentation were recorded live in to 4 mics in the middle of the room, mimicking the old days of singing in to a “can” and straight to vinyl. The result is an album which is free of the stiff perfection of today’s records, and free to explore the exceptional musicianship of The High Desert Playboys.

We hope you enjoy our labor of lost love. We can’t wait to see you on the road.