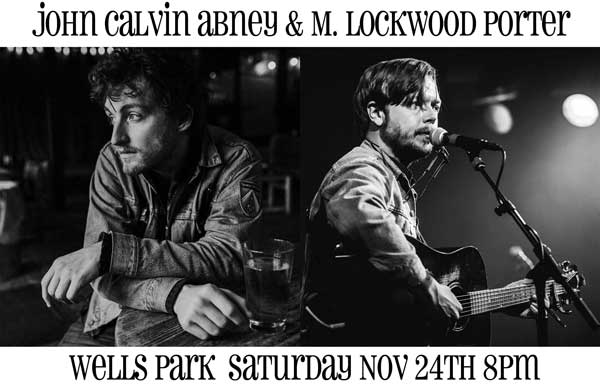 For the past decade, John Calvin Abney has made a name for himself as a solo artist and sought-after sideman. He’s toured as lead guitarist for fellow Oklahoman John Moreland, recording with him on his last two acclaimed albums, and in between, the prolific Abney found time to add another impressive record to his own catalog (2016’s Far Cries And Close Calls), supporting the release with a run of solo shows during a whirlwind year filled with as much struggle as success. Abney’s new full-length, Coyote (out May 18 on Black Mesa Records), draws from this tumultuous time, fearlessly staring down distance, isolation and fading love, as well as loss, fear and disassociation from the self.
http://www.johncalvinabney.com/?fbclid=IwAR2ejDlB6UhZtHL-QOXO1r0n17XW10SUrW8b-PhQR74_Dfhe4zyqUh9GyUE
The Berkeley, California-based singer-songwriter M. Lockwood Porter is part of a promising crop of up-and-coming Americana singer-songwriters. In the past three years, he has released two critically-acclaimed albums and performed all over the US, sharing the stage with acts like American Aquarium, David Wax Museum, Lee Bains III & The Glory Fires, Water Liars, Samantha Crain, David Ramirez, Aaron Lee Tasjan, and John Moreland. He has performed at festivals like Outside Lands, Noise Pop, Norman Music Festival, and CMJ. No Depression called Porter’s 2014 album 27 “a solid album worth your time, attention, and money.” In a review of 27, Americana UK said, “Take care with M. Lockwood Porter. He is an important singer-songwriter.”
http://www.mlockwoodporter.com/?fbclid=IwAR0dQGnW4SmaqtG-2u45R-QVzxx0eqbsJ6mcQ3sGqoNl9xDYOHNn6OVpMU4