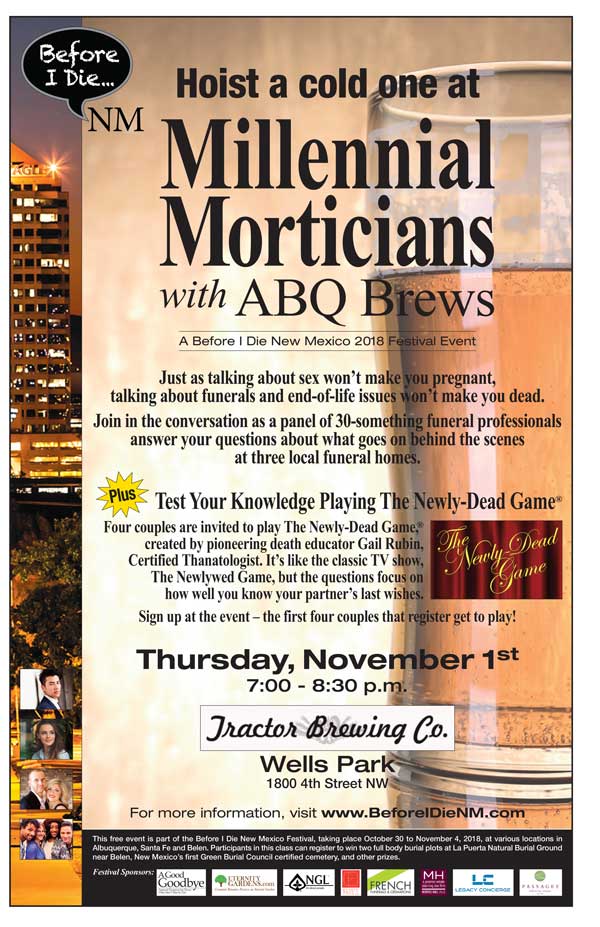 Just as talking about sex won’t make you pregnant, talking about funerals and end-of-life issues won’t make you dead. Join in the conversation as 30-something funeral professionals answer your questions about what goes on behind the scenes at three local funeral homes.

PLUS, four couples are invited to play The Newly-Dead Game®, created by pioneering death educator and festival coordinator Gail Rubin, Certified Thanatologist. It’s like the classic TV show, The Newlywed Game, but the questions focus on how well you know your partner’s last wishes. Sign up at the event – the first four couples that register get to play!

What: Millennial Morticians with ABQ Brews and The Newly-Dead Game®
When: Thursday, November 1, 7:00 p.m.
Where: Tractor Brewing Wells Park, 1800 4th Street NW
Who:

Jody Herrington, Daniels Family Funeral Service: Jody is an experienced funeral director who has worked at funeral homes in Washington, D.C., Boise, ID, Santa Fe, NM and now Albuquerque. During her time in D.C. she was the liaison for Arlington National Cemetery and the Military District of Washington preparing state funerals.

Aaron War, FRENCH Funerals & Cremations: After a stint as a forensic photographer at the Office of the Medical Investigator, Aaron became an autopsy technician. He is now a licensed Funeral Service Intern, doing embalming and body preparation work.

Michael Garcia, Salazar Funeral Homes & Crematory: Michael, 30, is a Funeral Service Intern who has been in the business for four years. He previously was a morphology technician who helped the pathologists at the Office of the Medical Investigator do autopsies. He is a lifelong New Mexican and graduate of the University of New Mexico.

Moderator: Gail Rubin, CT, The Doyenne of Death®, is the author of three books on end-of-life planning, creator and host of The Newly-Dead Game®, and coordinator of the Before I Die NM Festival.